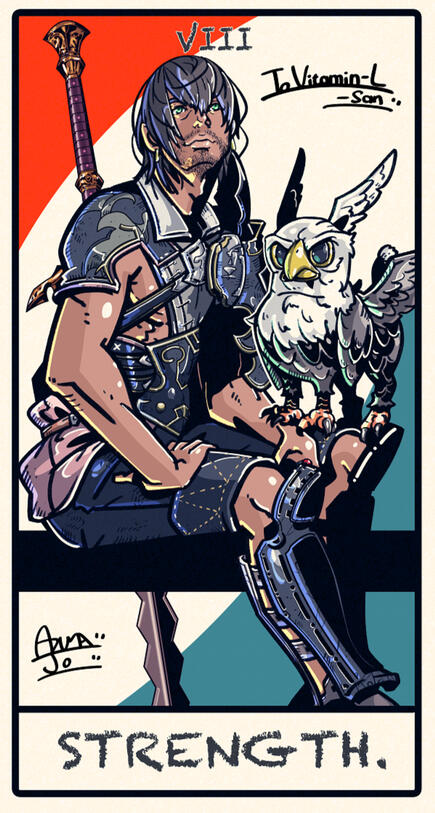 Here's the broad strokes of my cringey OC 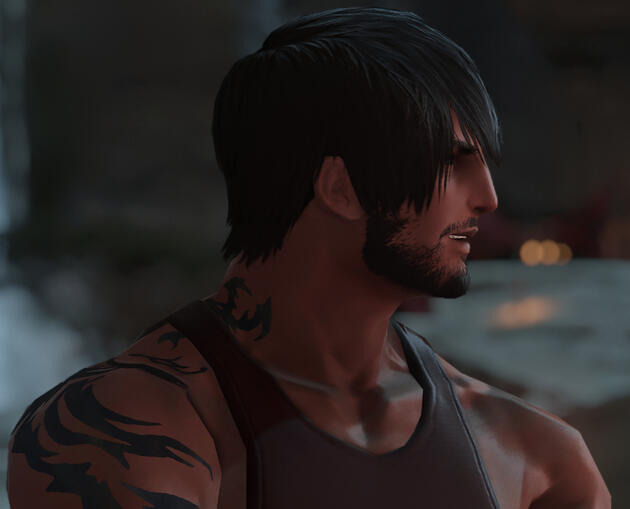 Like any saltborn son of Ala Mhigo, Gair is tall, dark and mighty by all appearances. Posessed of a complexion akin to sun-baked clay, having been beneath it for much of his life. The scars on his form read like a violent tale, each one a close call, a moment recklessness or a wound suffered on behalf of another. He carries himself with a calm and controlled surety, unlike most of his ilk who swagger around with pride, ready to throw their weight into those weaker. There is a clear effort to be mindful of when and where he imposes his strength. When he speaks, his tones are smooth and deep, a youth with chords unmarred by time and smoke. He posesses a range that may surprise listeners in the odd moments a song passes from his lips.

Gair is a native Gyr Abanian born some years before Garlemald's occupation of Ala Mhigo, formerly a refugee and now fully actualized citizen of Ul'dah. During his escape from Ala Mhigo he lost his birth parents and instead came into the care of disposessed Miqo'te from the Sunseeker antelope tribe. He learned much from the young tribal sisters and together they scratched an honest living out of the sands in Thanalan as a found family that he cherishes to this day.

Some that have grown up in Ul'dah may well know him from retainer work he has done at the vocate, in particular mining for the guild until he signed up with the Immortal Flames in his teenage years. He appeared to sign on at the perfect time, what with Dalamud falling and Garlemald occupying central Eorzea. The saltborn highlander had ample opportunities to ply his steel at home and abroad, whether it be against foreign invaders, the Amalj'aa or in his own city's colosseum.

All in all, Gair is a man motivated by the pursuit of strength, mastery and his own just nature. Being raised as akin to a Tia by his sisters, one might get the sense he's always seeking to prove himself. He walks the tightrope of descending into the brutality his profession as a soldier demands. Ever striving to hold onto his sense of humanity and compassion for others, even for his foes. Though there are times he struggles, falls short, disappoints himself and others: giving into the temptations of cruelty or vice in moments of weakness.

The TL;DR is in "profile" if you don't wanna read this shit, I sure wouldn't.

Born to native Gyr Abanians, Sir Daein and Ilya Brandt. His father was a knight in service to the royal family, allowing him the modest privileges of lesser nobility. While Ilya stayed at home and raised Gair, she was a skilled Disciple of the Hand and was a respected craftswoman with a talent for creation. Though the idyllic family life would not last, Sir Daein would fall in battle against the Garleans as the threat of the Empires subjugation became a chilling reality. Ilya took her son to flee for the Twelveswoods and Gridania, fortune would not favor the mother in her escape. Ilya was cut down in a hail of gunfire and her son was a sniveling mess beneath her, laying there for hours in horror, fearful he would meet the same fate. Until a similarly hard-up pack of tribal Sunseekers happened upon the grisly scene, taking the boy in as their own, raising him as they would any Tia.

The sisters set out with their new brother in the hopes of better fortune, for Thanalan and Ul'dah: the way many natives of Gyr Abania fled. Their tribal lifestyle clashed harshly with the more modern ways of the local city-dwellers, living more on the peripheral of society for years. This would prove a boon, however, as their skills lent well to living off of the surrounding land and scratching a life by scavenging the lands near the grand city. Decent enough game among the sands to eat, trophies and parts of beasts that sold passably to merchants too feeble or busy to procure themselves. He was spared the way of his brethren on Pearl Lane, instead working himself to the bone to help support his family through honest and hard work. Instilled with the values of tribal Miqo'te, to value his tribe among all else, to grow as strong as he can that he might soly provide for each and every one of his sisters. It became a core tenet to his being ere long, to fail them was to fail as a man. Those efforts never went without recognition and while the days were long and hard, there was no shortage of revelry and song when the sun set.

As the boy turned to a young man, no suitable Seekers rose to claim the sisters for their own harem. In truth, the only man in their midst worthy of the honor in recent years was the hyur in their midst. Who now stood head and shoulders above them, there was no argument who their Nunh was. However, Gair wished no such thing and accepted the title of Nunh in word only. Now the honorary head of their "tribe", these domesticated Seekers all forsook their clan's name for Gair's own family name. Going on to extend this tribal mentality to the city that took him and his family in, Gair enlisted with the illustrious Immortal Flames as a teenager. Part of the Ala Mhigan brigade at first, he served as an auxilary soldier and provided relief to those effected by the calamity in the wake of Cartenau. Only going into full active duty once the Eorzean Alliance checked Garlemald, happily joining the ranks on the frontlines to retake his homeland under Ul'dah's banner.

Because I'm conceited enough to include this

While on a joint training exercise with the Maelstrom at sea, Gair came across a rather waterlogged Raen woman who had been swimming for three hours from her shipwreck to find help. After commandeering a life boat and returning to the wreckage with her, the pair secured survivors on the remains of the ship and brought the injured onto their small vessel. Effectively saving their lives by buying them time for the Maelstrom to bring real ships to evacuate proper. The same Raen woman can be found in Ul'dah, in and out of Gair's place of residence.

(8/10/2019 and 7/19/2020) Gair has proven his prowess with steel twice as champion of the Grindstone, the champion's purses generously bringing him into Ul'dah's wealthy owner class and garnering him a reputation among potential employers.

Rumor has it that a century of Imperials behind allied lines were checked by a particular rag-tag group of adventurers and a hired mercenary band. Among those sighted, at the head was a Flame Elite, a one-armed Ishgardian Knightess, a Miqo'te woman with a gun, a lilac-haired lady who wielded magicks, a very short man punching magitek armor and a Raen conjurer.

Involvement in taking on contracts with the Yellow Jackets has thrust him into contact with the criminal elements of La Noscea pushing a dangerous drug. During this time he is conducting his own investigation into these matters.

Because I write a fighty boy 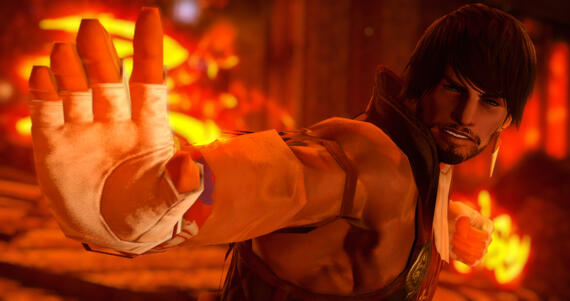 Every bit the man of Thanalan, Gair learned the way of the sword and the fist early on. He fights like a true gladiator, whether he intends it or not, he tends to make a spectacle of any fight he takes a part in. Though this isn't a mere attempt to puff his chest out and make a show of it: he's an astute student of war that tries to push the boundaries of physical technique as far as his body will allow. For someone his size, he's surprisingly quick on his feet and even quicker to move his blade with a power that demands caution and respect from those he fights.

A swordsman by reputation, he almost always favors a blade on his belt or over his back. The type will vary depending on the task at hand, ranging from a sizeable greatsword for hewing great beasts and magitek on the battlefield- to a smaller middle length sabre for missions of stealth. Make no mistake, though, he has a strong foundation with most all martial weapons and his bare fists. After all, the true weapon is the wielder.

He is no accomplished mage of any stripe or creed, but he is possessed of a gift with wielding fire alongside steel to great effect. Capable of setting his sword alight, projecting waves of flame, scattering blinding flashes fire and even propelling projectiles with explosions. He makes for a tricky opponent to fight, and a concerning ally to be beside as he lets loose his explosive bend to warfare. 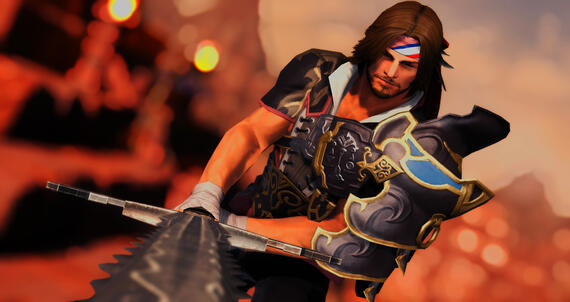 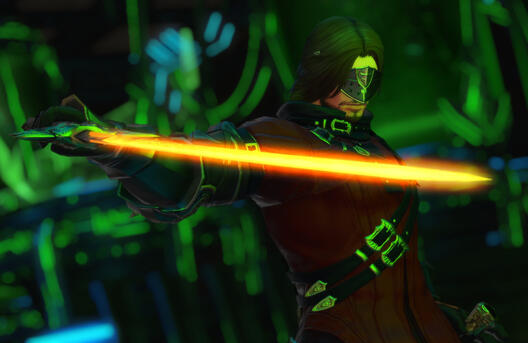 The dude at the keyboard 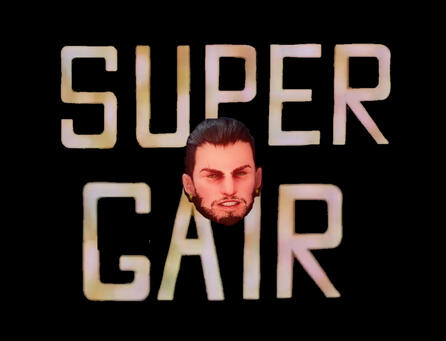 Screenshots that make Gair look cooler than he actually is